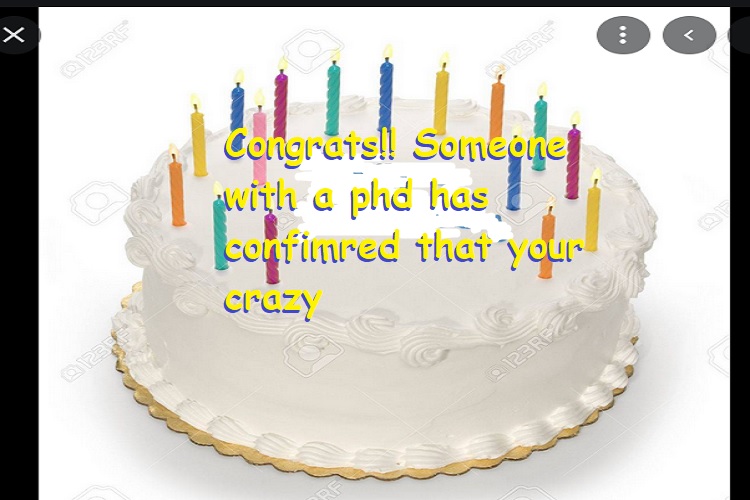 I recently had psychological testing done. The process was as follows:

The first thing I had to do was do a virtual appointment with the psychologist, which was at least a month out from when I first called them. Not their fault, thats just how it be. Before the appointment I had to fill out a form with the usual doctor stuff but I also had to go into my history of trauma and stuff. Then when the appointment actually happened, she just straight up asked me everything again and I had to say it out loud with my voice, which was hard. I told her I already filled this stuff out but apparently they’re Required to ask it again for some reason. Then I made an appointment (another month out) to go to their office in-person to be tested.

Going in, I didn’t really have any idea what it would involve, or how long it would take. I naively thought it’d be like a regular doctor’s appointment length. Like an hour, give or take.

It was actually 4 hours long. During that time I had to do a wide variety of tasks.

The first (and most excruciating) was having to sit in front of a Windows 7 laptop, watch letters flash quickly on the screen, and press the space bar on every letter that wasn’t X… for 15 whole minutes. I messed it up a lot, and I couldn’t sit still. According to the written report I got earlier this month, this was testing for ADHD. Spoiler alert: I passed!

The next tasks were a bit easier. One was being given some red/white die with different faces (full red/white, half red half white, etc) and shown a picture that I had to replicate while being timed; I think I did well on that one. Another was a pattern recognition thing, where I was shown a sequence of images on a tablet and I had to tap the next correct step in the sequence; Some of these were hard, some were easy.

Then there were the ones involving listening and numbers, which were difficult. The listening part was hard because she could only repeat the question once, and the math part was hard because I had to do it in my head instead of writing it out. I could manage when the questions were things like “Put the following numbers in order lowest to highest:” or “If you have 10 [thing] and give 5 of them to your friend, how many do you have” but when I had to do multiple math equations from memory, without paper, I couldn’t keep up.

The last part was having to fill out tons of questionnaires. Many of them were multiple choice and even though I didn’t see the Official Names for them, I recognized that they were asking about depression, PTSD, ASD, etc. I don’t know if it did, but it feels like filling these out took the bulk of the time I was in there. Only one was a little harder for me to figure out, basically there were sentences that I had to finish with the first thing that came to mind. Some of these were easy, but some of them I had to think about because… nothing came to mind when I read them. I don’t know if that was obvious to the tester. Maybe she thought I didn’t want to write down the first thing I thought of, but in a lot of cases my mind was actually blank. I had to think until something came to mind.

A couple weeks later I had another virtual appointment with the psychologist and downloaded my report, where I was Officially diagnosed with the following:

Attention Deficit/Hyperactivity Disorder, Predominantly inattentive presentation, moderate-to-severe
This doesn’t come as much of a surprise to me, I had already self-DXed myself with this anyway, but its good to have confirmation. Especially because getting an Official Diagnosis means that I can get medication. It honestly feels more “severe” than “moderate” most of the time to be honest, because I literally can’t form good habits or hold down a job to save my life. I really hope medication will help because even though I have no interest in being a good employee, I would like to be able to stick with something for longer than a week/day/few minutes. Or not forget what I was supposed to be doing because I suddenly decided I needed a digital watch and spent a couple hours researching the best one within my budget.

Persistent Depressive Disorder (Dysthymia), with anxious distress, early onset, with intermittent major depressive episodes, with current episode moderate
Basically I’m constantly depressed to some degree, have been most of my life except for the times when I get extremely, incapable of functioning depressed. Like the time I couldn’t shower for nearly a year, or worse. The lexapro has taken the edge off considerably though. Again, this isn’t a surprise, but it turns out Depression is considered a disability, so I could in theory qualify… Or at least if I get a job, I could make them accommodate me.

Social Anxiety Disorder (Social Phobia)
This was a little bit of a surprise. Maybe I just had an inaccurate perception of what social anxiety disorder was. For me, as long as a social interaction is brief and sticks to the commonly understood script, I can manage. If I don’t have to make too much eye contact or make my face look friendly for too long, I can deal. I don’t like being looked at or spoken to by others, but I can power through it whenever I need to be outside. I can’t handle having to keep track of a large friend group and the expectations that come with being known beyond a certain degree by too many people. I actually find that I’m content with not having much of a social life, so I don’t think there’s anything that needs to be “fixed” here.

The only issue I can think of relating to Social Anxiety is my refusal to answer the phone or listen to voicemails from 99% of the calls I get. But honestly, anyone who actually needs to talk to me knows to text/IM me or wait til we’re in the same room.

Gender Dysphoria (Transgender – identifying gender, male)
This was also a surprise, but not because I didn’t know I had it. Believe me, I know. What surprised me was the ease with which I was diagnosed with it. I still remember the hoops the very first trans woman I ever met had to jump through to “prove” she was really female to various shitty therapists, over a decade ago, and how thats still the case in way too many places today. I had just kind of expected that if I wanted to get any work done beyond hormones (thank u Planned Parenthood), I’d have to do the same.

But it turns out, my state is actually doing alright with regard to transgender stuff as of late. So I suppose I was the unwitting recipient of the my state’s benevolence, which allowed my fortunately not-transphobic psychologist to give me an easy diagnosis. At first I was like “lol I know that I’m dysphoric” but now that I’ve had time to think about it, this will probably make it a lot easier to get these godforsaken milk jugs off of me.

Something else of note was that I took the CAT-Q, which stands for Camouflaging Autistic Traits Questionnaire. My psychologist wrote things like “may force eye contact and walk in a manner where [he] feels more confident” or that I may use a script when talking to others – which I do – but she felt that these were more related to my socializing issues than signs of ASD. I don’t disagree, but I wonder if it might still be worth it to get a second opinion.

The only other thing that stood out to me was that I was misgendered for the entirety of the document. I told the psychologis that I would set up another appointment with questions after I had read the report so, in addition to asking about the possibility of ASD, I’ll also be pointing out the misgendering. Aside from that though, my next few steps will include:

Find a new, not condescending psychiatrist so I can get a refill of my lexapro and get something for my ADHD. I also need to get back on T, but I’m not sure if my poor people govt insurance will pay for it, so I’m putting that on the back burner for now. There is a problem with finding a psychiatrist though, and that is my fucking insurance company apparently years-out-of-date listings of which providers are covered, so most of the psychiatrists I’ve tried to contact don’t take my insurance.

Get my ovaries removed. I’m hoping that with the combined official Gender Dysphoria diagnosis plus my history of ovarian cysts (and the fact that I’m out of my breeding years with no children and no desire for children) will be enough to convince a surgeon to take them out. Yeah, I know I mentioned top surgery earlier, but like with the T, I’m not sure my insurance will cover it. I’m only focusing on things I’m reasonably sure will be covered for now. Getting my ovaries out will prevent future cysts as well as reduce the amount of estrogen my body produces, which should (hopefully?) result in some masculating side effects.

Begin the likely long and arduous process of getting SSI. The fact that my depression is particularly malignant plus my other diagnoses should hopefully be enough, but I know enough about the process to know that it’ll still be a fight. Even if the amount I get isn’t that much, my expenses are so low at this point that I could probably make it work?