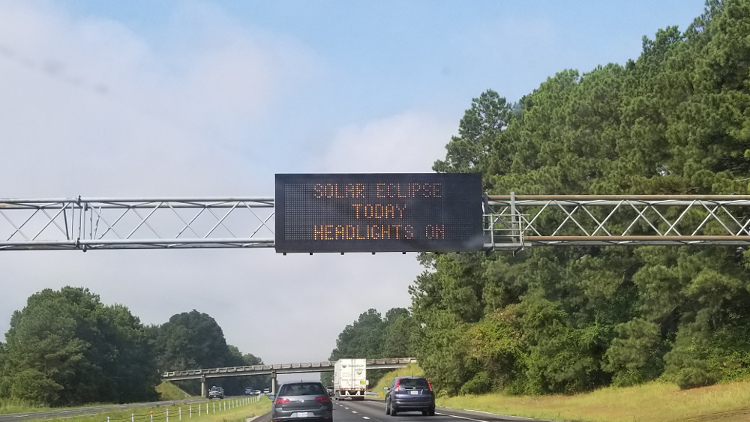 Seeing the solar eclipse of 2017 was the first real trip I had taken in a very long time.

Before that I think the only longish distance trip I had taken previously was a few years prior, to this science museum in Richmond VA, and a few years back even more was some urban exploration somewhere in Fuckami North Carolina. But I ain't posting any pictures from any of those trips because 1) I don't have them anymore, 2) I'm in them and just the memory of how I looked back then makes me wanna puke from the dysphoria lmao

So, how about that eclipse?

(Quick note: if you're sensitive to descriptions of unhealthy relationships, scroll past the next section until you see "The drive down there..". Unfortunately, no matter how awesome the eclipse was, it wasn't enough to eclipse my memory of the circumstances surrounding it.)

[REDACTED] and I were in a weird spot in our relationship by this point; I had broken up with him shortly before this, but I was still living with him (not that the relationship was ever not weird). But we decided to go down to South Carolina, to be in one of the ideal spots to see the eclipse at its best. They're rare events and we both think eclipses are cool, so why not try to set aside relationship issues to go see it?

We spent some time discussing plans prior to the big day of course. I say "discussing", but the reality was we were doing things his way, and the discussing was just him arguing with me when I disagreed with him on how to do things.

What would've been ideal was driving down there, enjoying the eclipse and SC for the rest of the day, sleeping in a motel (or at least in the car at a rest stop), then leaving for VA early the next morning. I didn't want us to have to haul ass back up to VA the second the eclipse ended, I knew that would be stressful and exhausting. Neither of us had work and we were boarding my dog til the following evening anyway, all we had to do was ask someone to feed the cats while we were away. One of my friends is good with pets, so I wanted to ask them. But this was unacceptable to [REDACTED], because he "didn't trust" them.

His Extremely Normal alternative was to get one of his previously unknown to me coworkers to do it, but he was going to set up fake cameras all over the house to make sure this guy didn't try anything. Yeah. Not only do I not know this guy, but this galaxy-brain dropping of a plan begged the following questions:
If you're going to waste money on fake cameras to scare a guest into behaving, why does it matter who the guest is?
If you don't trust your coworker to be in your house unsupervised, why would you rather him be in your house than my friend?

I should also point out that he and his coworker work/ed with computers and tech in general. Its likely his coworker would recognize a fake camera if he saw one, so this fake camera bullshit was just a convoluted, indirect way of saying "I don't like your friend and don't want them around". Naturally, I thought this was fucking stupid and didn't agree to it. [REDACTED] wouldn't budge, so the less ideal alternative of getting there and coming back in the same day was settled on.

Something else that was non-negotiable was him being the one to drive down to SC. I tried to convince him on two separate occasions that I should be the one to do it because I would be too exhausted to safely make the trip back to VA. He lived with me, its not like he didn't know that my job at the time got me up well before 6AM and because of that I was useless at night. But no, even though neither of us had been to SC before, he knew he could do it better than me because... He had driven on the interstate farther than I had. I don't know whats worse, him thinking I was too incompetent to handle driving south for 6 hours, or him giving me a nonsensical excuse instead of directly telling me he thought I was incompetent. It was easier to let him have his way, so he got to drive to SC. And he also got to drive back up to VA because - just like I told him would happen - I was too tired to safely drive afterwards.

The drive down there was foggy and overcast at first, and gradually turned bright and sunny. 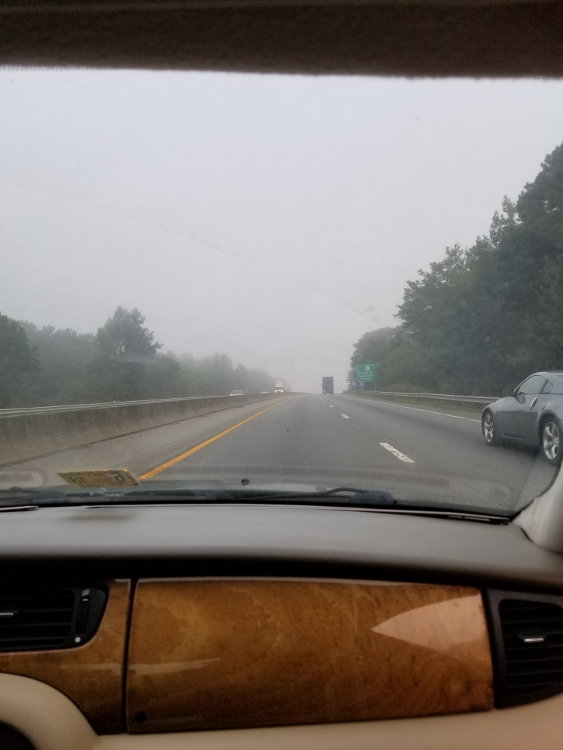 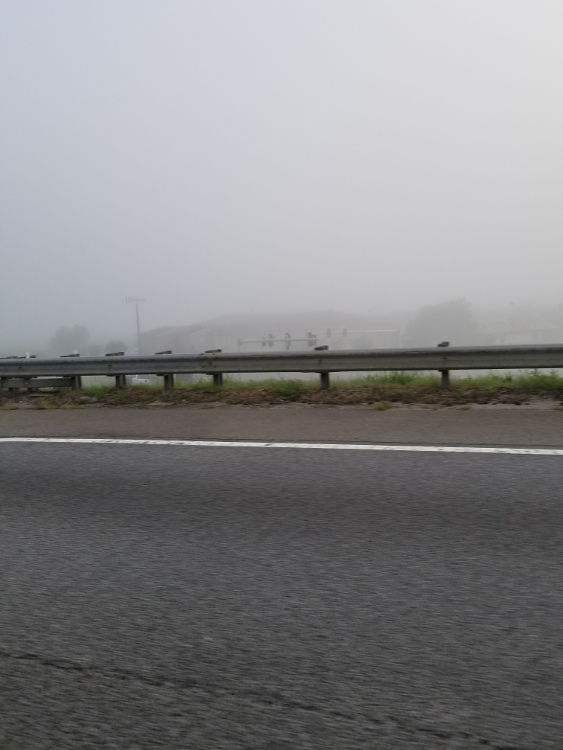 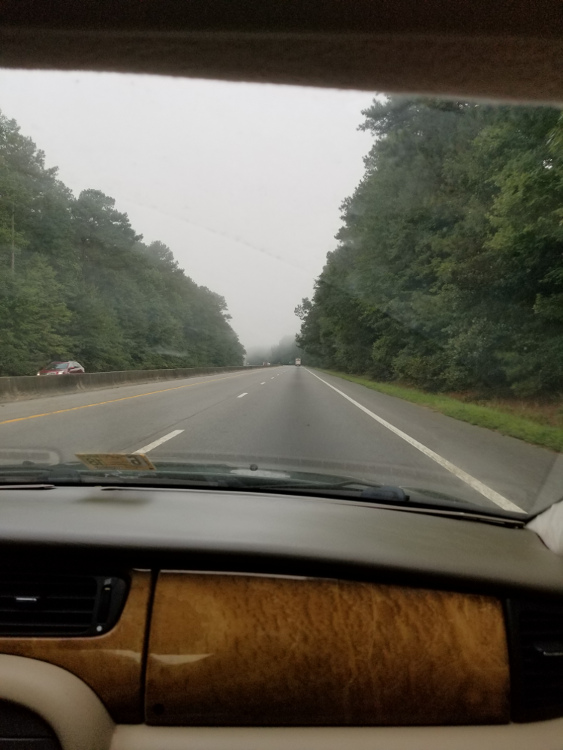 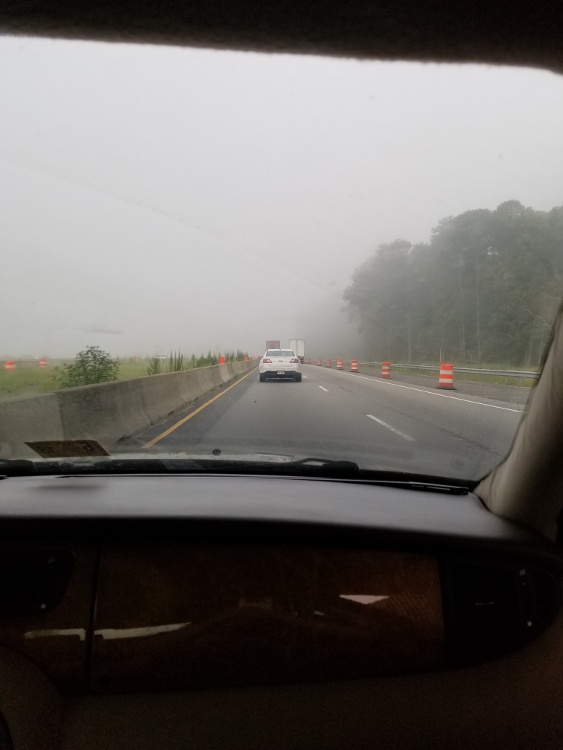 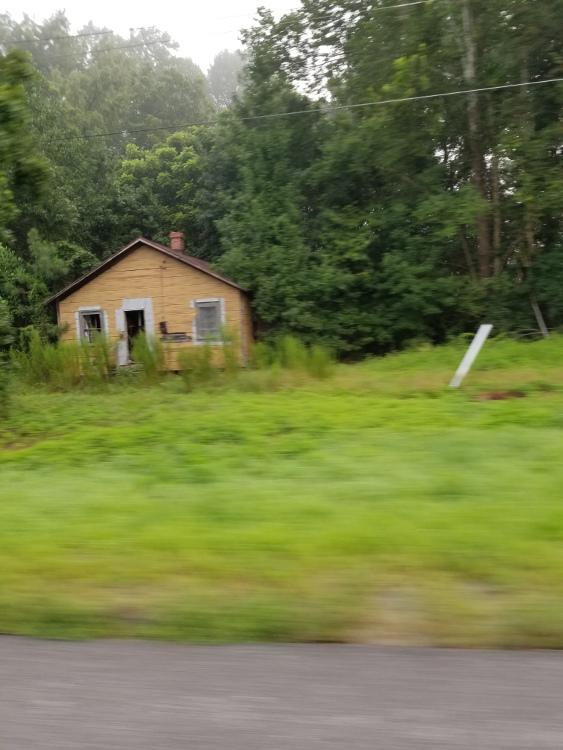 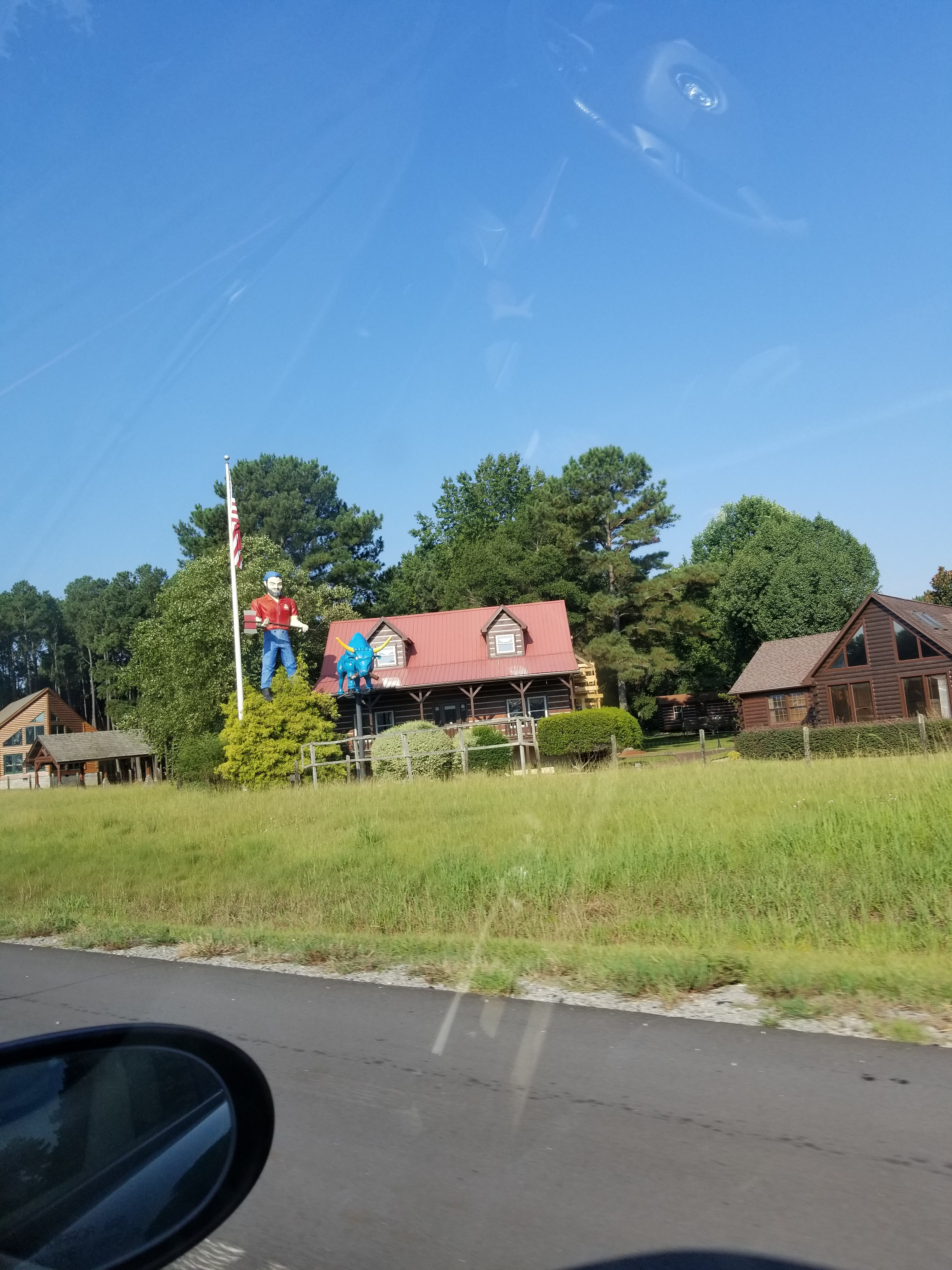 And just check out all those trees! The forests are so much denser than I'm used to seeing where I live. I hate looking out my window at home and seeing nothing but cars, houses and people, so seeing all this nature was a real treat. Its almost nothing but trees going from VA to NC...

If you miss the "Welcome to North Carolina" sign, the other surefire way to tell that you're there is when you start seeing these: 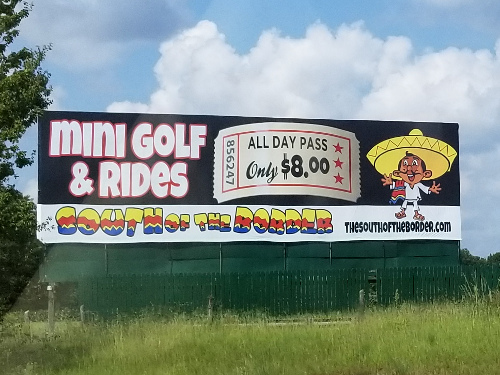 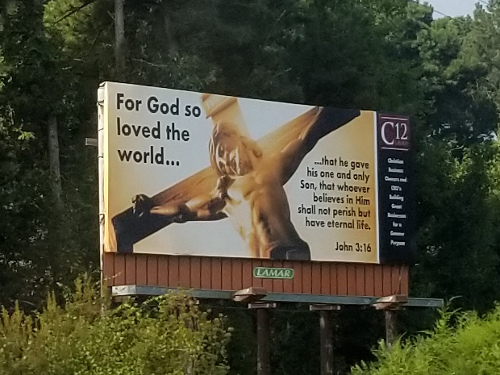 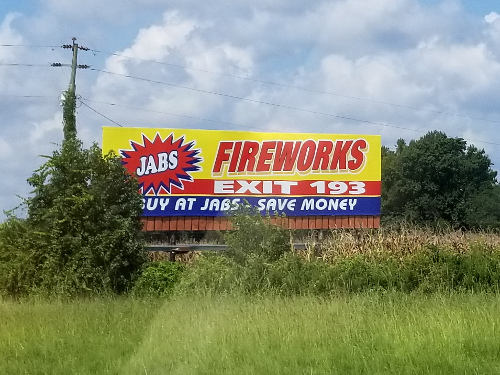 You don't see any shit like this where I live either, so I guess that means I can say one good thing about my state. 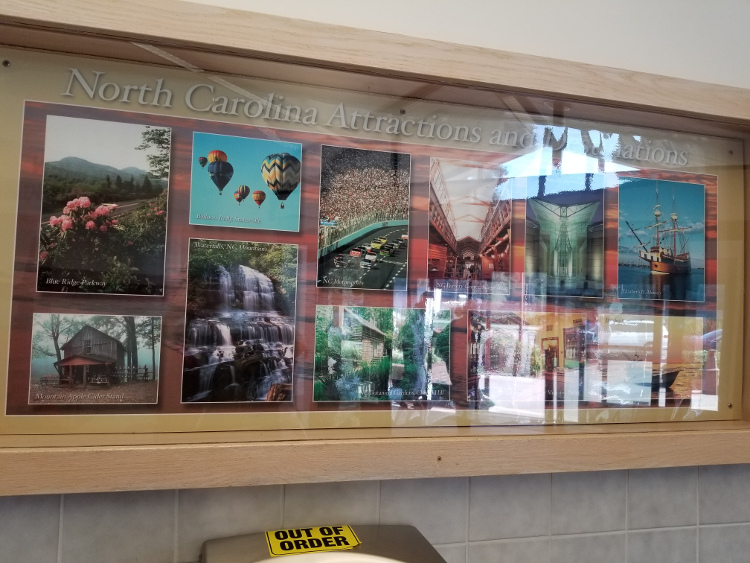 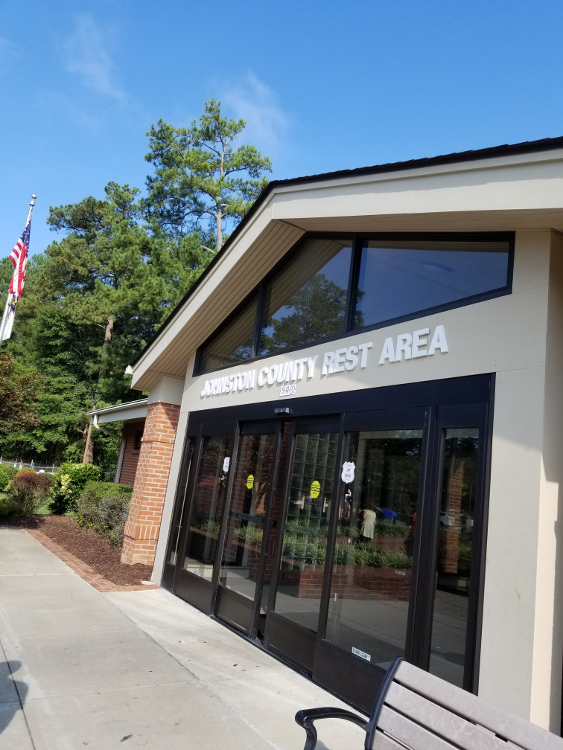 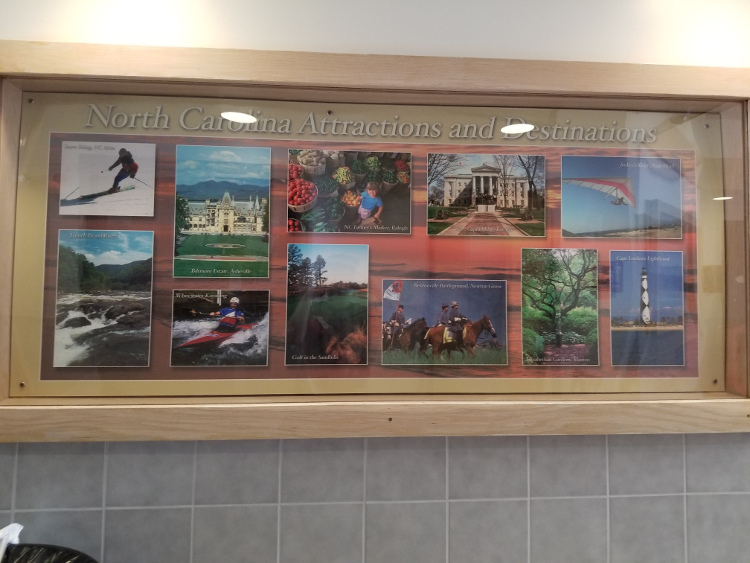 Finally, we arrived in SC! 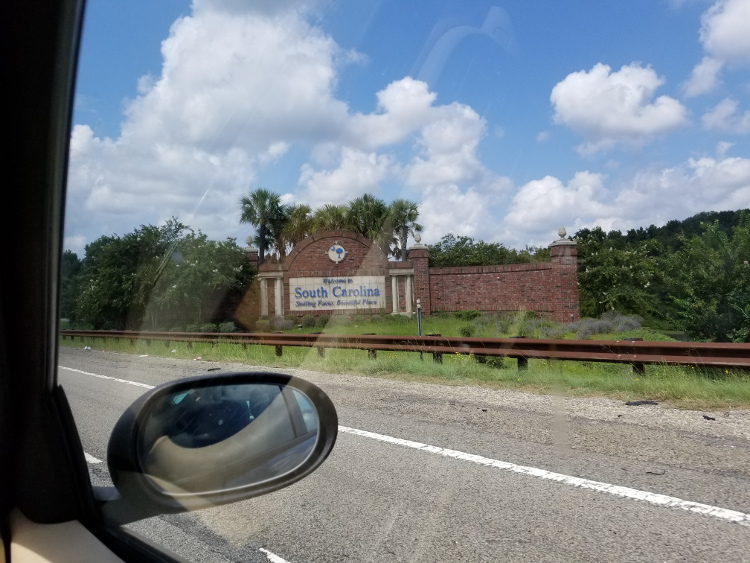 After a short coffee break, we got to our destination in plenty of time. I honestly have no memory of where we went. It was fairly remote and near a lake I think. I didn't take any pictures because there were a lot of people and I didn't wanna take someone's photo without their permission, and I think we were in a...neighborhood? timeshare?? So it felt weird to be a stranger and taking pics that would have people's houses in them.

Something I didn't know prior to this was that an eclipse is more than just the moon passing in front of the sun. Leading up to it is also really interesting distorted shadows. I wish I had gotten better pictures for this part... but IIRC my phone was low on power and I was trying to be more In The Moment. If you care that much you can just search up some eclipse shadow distortion pix on your own time

Something that can really only be captured in person though, is being able to look at the sun without being blinded. Of course, you need the eclipse glasses to watch the moon move in front of the sun, but for the few minutes its covering it? Not only is it like midnight during the day, but you get to look our terrifying sky lamp right in the eye.

And if you take a picture of the eclipse with a camera not suited for that kinda thing, it DOES look like an eye: 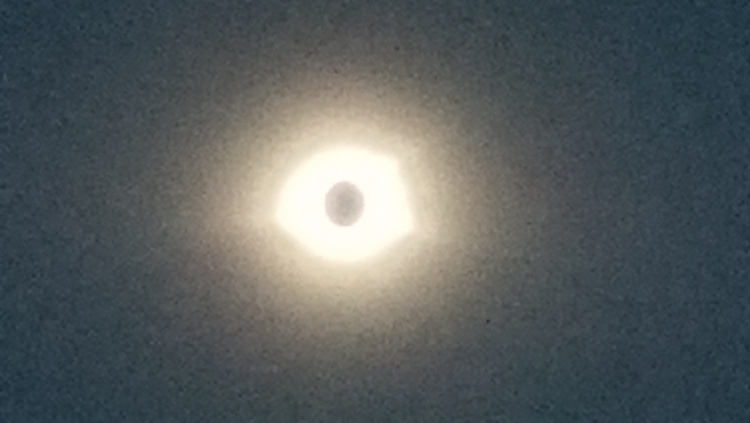 Like previously stated, we ended up having to leave immediately after the eclipse was over. We were nowhere near first amongst a large mob of people trying to get onto the one small road that led into this neighborhood. It was also really fucking hot, so you can imagine how little fun was had. I knew something like this would happen during the planning phases of this expedition, and if I had gotten my way we could've avoided it.

Once we had finally gotten out of there and back into some semblance of civilization, we hit up Waffle House for dinner. Also not ideal, but this is SC we're talking about. Sometimes a vegan just has to be ok with a plateful of mediocre hash browns and overpriced orange juice.

We missed it the first time, but we had to drive through South Of The Border on the way back. Its like a.. tourist trap? theme park?? thats literally right on the interstate. It was also pretty congested and we were stuck in it for a while. I was just awake enough to form memories of a garishly racist nightmare. Fortunately, aside from that, it was pretty much a straight and uneventful shot home. It was super late - or early, depending on how you look at it - by the time we got to the house, so I passed out pretty much immediately after getting inside. 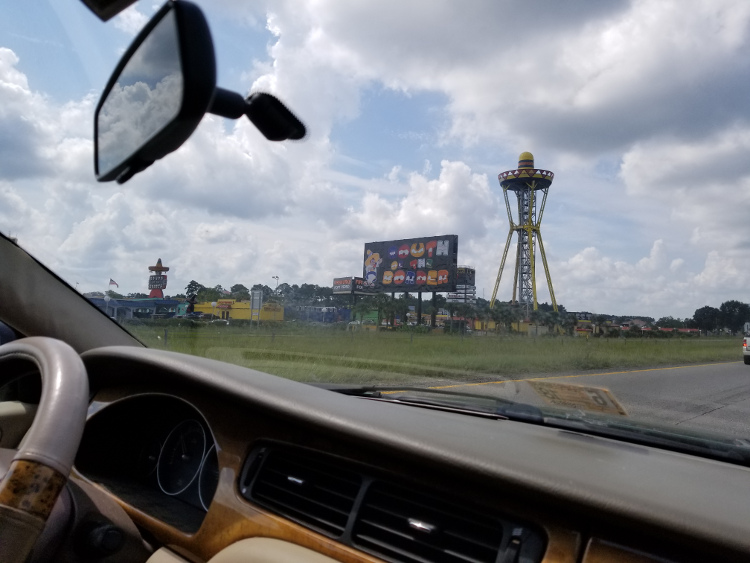 And so ends this chapter. What have we learned? What lessons can be applied to our lives from this point on? I don't know about you, but what I got out of this trip was:
1) If you have the opportunity to witness a solar eclipse, do it!
2) If you can't travel alone (ideal), at least travel with someone you get along with!