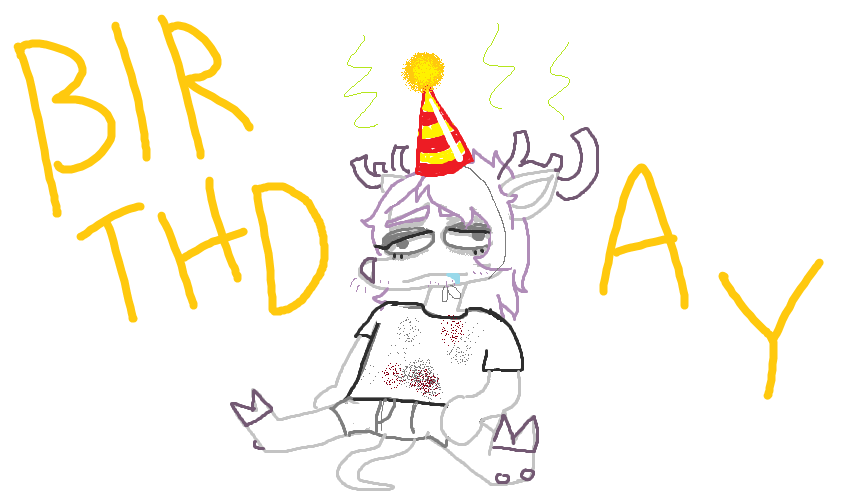 Its that time of year again!

The day where I, 30+ years ago, was dragged into existence. In years past this was cause for celebration, but nowadays that doesn't happen so much. Not that I mind. I don't really remember my birthday parties as a child. Like, I remember one where all I remember is my mom being pissed off because I was wilding out during my party at Pizza Hut. In my defense, Pizza Hut used to be fucking amazing, so of course I was absolutely losing my shit. And I remember some other kids' birthday parties, where one kid made it clear to me that she didn't actually want me there, she only invited me because her mom forced her. Or another party where the only thing I could give the kid was a little story I wrote for them, and the mom trying too hard to cover up the silence from the other kids with telling me how good it was.

I don't really remember the ones I had in my 20s. I feel like I should because they should be fresher in my memory, but they're all just a barely legible smudge in my brain. Right now I'm assuming this is because my ex was involved with most of them; birthday-related memories involving friends are easier to recall, but I still can't recall them 100%. Its not that I don't appreciate all the people who have given me things or done things with me on my numerous birthdays - I certainly appreciated it in the moment - I just cannot for the life of me remember specifics for the majority of them. One that I do actually remember will become its own post in the future though (my trip to Portland, OR).

Its with this in mind that I'll at least make an attempt at describing what today's been like:

First, I slept in til about... 10~11AMish. Part of that was because I took my dog out for her brief daily Before-The-Sun-Comes-Up walks. She gets me up anywhere between 2AM to 4AM because she has to pee and in her old age she isn't able to hold it like she used to. Usually I try to get up by 7AM-8AM but some days some combination of this and other factors led to me oversleeping. Its not like I have anywhere to be. After breakfast, another walk, and some Neopets, I basically entered into the kind of incoherent, quietly stressed out about nothing in particular kind of haze that may be familiar to those with depression and/or anxiety issues. Ya know, when part of your brain switches off and when it comes back on again you realize several hours have passed.

I was stirred out of this by the realization that the mail had come. My dad had sent me some birthday money, which was much needed since prior to this I only had 70something cents in my bank account. It wasn't that much, but was enough to stir me into action: taking my first shower this week, and then risking re-infection by going out and getting some much-needed groceries. Even though I was feeling depressed in ways I can't really articulate wrt my birthday, I did treat myself a little: I got one of those big cans of diet coke that Dollar Tree has, some salt and pepper cashews and chex mix, and later on a dragonfruit at Walmart. Fun? fact: I would not have considered buying a dragonfruit if it weren't for 2can.tv, so right now I'm blaming Brock's toucans on me spending six whole-ass dollars for one piece of fucking fruit.

To be fair though, it is one of the most interesting-looking fruits I've ever seen. Very beautiful! The texture of the flesh inside is kinda similar to a melon, but squishier. Its very watery, the taste is mildly sweet with a vaguely apple-like tart aftertaste. I should also note that the flesh gets tarter, even bitter, the closer it is to the skin, but it never reached unpleasant territory. Its packed full of little seeds, but they're so small and easy to chew you don't really notice them. My final verdict on this fruit is: its good, but not good enough to make me want to regularly drop $6 a piece on. Its just too much money for not enough value (to me, at least). A fancy fruit that I DO find worth spending the extra money on (and is cheaper than a dragonfruit) is the pomegranate. Even though the fruit is considerably harder to peel and the kernals inside are unpleasantly hard, the flavor more than makes up for everything. And pears? Those can go fuck themselves.

Not all the 'presents' I recieved today were given to me by me, however. There were a couple of happy coincidences online. First was when I looked at Youtube and say that Captain Disillusion finally posted a new video. What a great guy, he could've uploaded earlier this year so that his "Its the start of the year" line in the intro would've made more sense, but he decided to wait til today to surprise me! (This is a joke.)

The second surprise came in the form of the trailer for the next Gorillaz video. Just... look at this thumbnail. 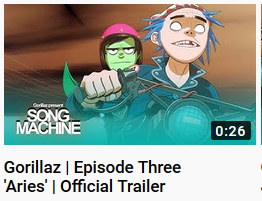 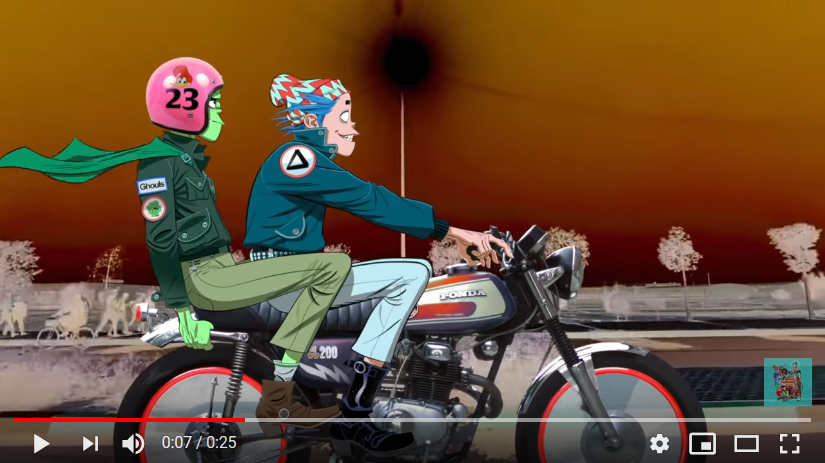 I don't know about you but as a degenerate 2Doc shipper (you may unfollow me now), I am living. Like, don't you usually hold on to the person whos driving the motorcycle? Idk I've only ridden a motorcycle once, and holding on to the driver just kinda made more sense. Murdoc is making a point of NOT holding onto 2D. Which raises the possibility that he might grab onto him at some point in the video. I will shit myself if that happens. I really doubt they'll Make 2Doc Canon - and I hope they don't, tbh. tl;dr: I don't trust the writers to pull off a relationship with that kind of past in an appropriate way AND not have it feel like pandering - but they really seem to be suggesting something is going on with these two. I'm tentatively excited.

Anyway, and now I'm in bed typing this up. I still have money left over and I did need to buy a new backpack, but I'm gonna hold off on that for a little while until I figure out what type best suits my needs. After all, there are a few more pressing things I need to throw money at first...

With all that written up, I at least have something more concrete to remember this birthday with, should I need to. It wasn't the most exciting, but I've certainly had worse so I suppose I don't have much to complain about. Here's hoping your April 8th was equal to or greater than mine! G'night.